Most of January and February were taken up with finishing the mural surrounding a swimming pool in Pembrokeshire.  This began as a continuous image which covered two walls of the pool  but the owner then decided he wanted the other two walls created in the same style.   The images here show both the finished works and some details of this. 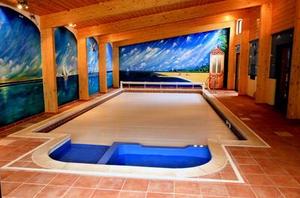 In early February 2007 Raul and Heather went to Venice for the annual Carnival.   The visual input of this and the beauty of Venice itself have created a store of imaginative energy which is finding expression in current works