Several commissions have been completed including 'Alice in Wonderland'

Negotiation has been completed and work started on  a 52 foot mural around two sides of a private swimming pool in Pembrokeshire. 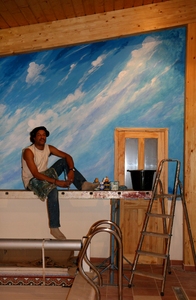 Progress pictures will appear monthly: this one shows the first day's work which created sky and cloud backgrounds on the end wall. 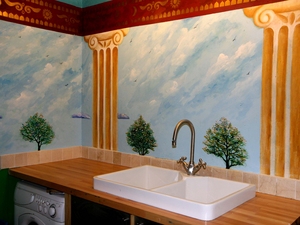 Completion of murals in the kitchen of Raul Speek Gallery have led to much interest and requests for similar works in domestic locations – Raul will soon have to be cloned to keep up with the volume of works required!!

Our Small Works Gallery has proved very succesful and will now form a permanent aspect of Raul's exhibited work – images in the on-line gallery will be update during January 2007.